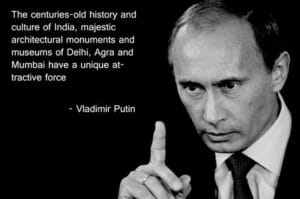 Agra’s history dates back to as far as the 11th century. Ptolemy was the first one to refer Agra by its name. It has also been mentioned in the Arya Griha during the time of the Aryans. Light must be thrown on the reference, which Agra has got in the great Hindu epic, the Mahabharata where it has been called Agra ban (ban meaning forest). At the time Hindu rulers dominated most parts of India. The mention in the Mahabharata of Agra Ban gives an idea that at the time Agra was nothing much but a dry arid forest landscape as is the nature with most parts of central India even till today.

One may probably imagine a dry dusty country land where Black Bucks could have been sighted much easier than humans near or far. This idea is credible since Abu’l Fazl, one of the navratnas or nine jewels at Akbar’s court mentions the pleasure of the Emperor at watching his ‘chita-i-khas’ or royal cheetah hunting a blackbuck after leaping across a river and chasing it down, as is mentioned in Akbarnama, the official history of Akbar’s reign. This point proves that even if Agra was founded as a city from dry scrub of forests, its surrounding areas were still forests, which had plenty of game to offer the royals in the form of hunting, a sport that was practiced from the time of the Rajas to the period of the British Raj.

Agra History: Under the Lodi Dynasty

Agra has long been associated with Muslim rulers. But before the Sultanate rule and the coming of the Mughals, it is said that the true founder of Agra as a city in its initial phase was Raja Badal Singh in the year 1475. The first Muslim rulers were of the Lodi Dynasty. It was Sikandar Lodi in the year 1506 that shifted his capital from Delhi to Agra and from this time on, Agra as a city gained much significance. Sikandar Lodi proved to be a capable leader and crushed many who came his way.

But in the year 1516, he died a natural death and the throne was taken over by his son, Ibrahim Lodi. Agra by this time started to flourish steadily as a human settlement primarily because of the river Yamuna flowing through it. This made agriculture possible. Trade at the time was limited and agriculture remained the primary activity. The hold of the Lodi Dynasty in Agra was to come to an end after 10years from the time Ibrahim Lodi took charge. In 1526, he suffered a defeat in a hard fought battle against Babur, the first Mughal ruler in India. The battle field was Panipat.

Agra History during the Mughal Period

This was the start of a long domination of Mughal stronghold not just in Agra but across many parts of the Indian subcontinent. With Babur on the throne, the influence of Islam started steadily in Agra. The ruler built the Aram Bagh or the Garden of Relaxation, where he was believed to have spent time relaxing while being away from royal duties.

In 1530, Babur died and was succeeded by his son, Humayun. The rule was interrupted only for a brief time between 1540-45 when Sher Shah Suri, an Afghan ruler born in Sasaram, Bihar defeated Humayun and took over the city. He proved to be an extremely capable ruler but his glory was short lived. He died of a gunpowder explosion while fighting the Rajputs in Bundelkhand. Humayun was back on the throne and Agra back to the Mughals. But it was from the time of Akbar, son and successor to Humayun who took to the throne in 1558 when Agra came to its own.

It was during the reign of Akbar when Mughal Architecture took prominence. Akbar consolidated his power and one of the first signs was when he reconstructed the fort of Agra from a mud-walled structure left behind by the Lodi’s into a huge Fort made of Red sand stone. Many other halls were added to this magnificent Fort later on by his predecessors, son Jahangir and grandson Shah Jahan. Akbar ruled for more than four decades in which he built a new city, Fatehpur Sikri, just a few kilometres from Agra.

During Akbar’s reign, Agra was modernized and transformed into a splendid city. Many soon referred it as Akbarabad. Agra came under Muslim influences and adopted much of the Muslim culture. But Akbar’s idea of religion was liberal and this he portrayed through Din-i-Ilahi, a religious doctrine introduced in the court to merge the best elements of every faith not just of Islam and Hinduism, but also Christianity and Zoroastrian. An example of his liberalism is the Padres Santos Chapel which stands even today.

It was constructed by the Portuguese, built on a land granted by Akbar himself to the missionaries which was built with the motive of dedicating it to the priests martyred in 1633. The Mughals were not only great at war but also had great love for literature, art and music. At the court of Akbar were greats like Abul Fazl, Faizi, and Tansen to name a few. Akbar finally died in the year 1605 and buried in Sikandra, just on the outskirts of Agra city. His tomb is inside a beautifully built structure of Fine Mughal Architecture.

During the reign of Jahangir, son and successor to Akbar, the English started to arrive at Agra as traders to be granted permission from the emperor for allowance to trade. As the accounts of the English Travelers suggests, there were no such law in the court of Jahangir. Agra was ruled by the King himself. Whatever he said was to be followed without any question. Thomas Roe was the first ambassador from the King of England to the great Mughal Ruler; Roe was not just a courtier, but a true diplomat and realist.

This was the first big step of the English to turn from traders to rulers during the later stages. In 1620 however, an independent English Traveler named Thomas Coryate arrived at Agra. He preached Christianity fro minaret of a mosque. No one bothered to harm him because they thought he was insane. Jahangir was married to Nur-Jahan, often known as the lady with the ‘iron fist’ since she is believed to have played a significant role in the emperor’s life who had a strong addiction to alcohol. Mughal architecture continued to flourish during the time of Jahangir.

The tomb of Itmad-ud-daulah is another fine piece of Architecture with great work in white marble. Right at the centre of this mughal structure, are the tombs of Nur-Jahan’s parents. Emperor Jahangir eventually succumbed to drinking when he died while on his journey back from Kashmir in 1627. His tomb is now in Lahore, Pakistan. It was after his father’s death that his son, Shah Jahan took over the throne. During Shah Jahan’s reign, Chini-ka-Rauza, a monument of unique architecture with glazed tiles was constructed as a memorial dedicated to his Prime Minister; Allama Afzel Khal Mullah Shukrullah.

This man was also believed to be a great poet and scholar and revered highly at the emperor’s court. But it is the Taj Mahal, the most magnificent of Mughal structure that Shah Jahan is most known for. The construction started in the year 1631 and took 17 long years before it was completed in the year 1648. There were more than 20000 workers involved to create and complete such a beautiful monument in memory of his beloved wife, Mumtaz Mahal, who’s original name was Arjumand Banu Begum.

The monument is of fine White Marble with impressive inscriptions on the marble walls in Persian and Arabic. Inside the Taj, are the tombs of the emperor and his wife. Many Historians believe that Shah Jahan had planned to construct a second Taj Mahal of Black Marble just across the river of the Taj that stands today. However, the cost that was incurred to erect the Taj Mahal led to great Famine of the city after the completion of the monument.

But its steady decline had started when the emperor decided to shift the capital to Shahjahanabad, which is modern day Old Delhi or Purani Dilli as it is known locally in India. He was succeeded by his son Aurangzeb, who shifted his capital south west to Aurangabad, leading to further decline of Agra.

Agra: Under the British Ruled Period

Decline of Agra was simultaneous with that of the Mughals over all. By this time the Marathas and British had gained considerable power. From the time Aurangabad became capital, Agra fell into the hands of the Marathas in 1570 before succumbing to the British power in the early 1800’s. The later Mughals who followed after Aurangzeb were not strong or capable enough to regain Agra. They were restricted mainly to Delhi and tried to tie up with regional powers wherever necessary in order to oust the British from their perch.

When the British took over Agra, they situated the city as a presidency in North India. With Calcutta as the capital during the British Raj, Agra lost its significance which it once had during the time of powerful Mughal rulers. However, a few Churches and missionaries did come up when the English finally strengthened their hold. St. Patrick’s Church is a famous one in the city. St. Georges Church and Havelock Memorial Church were built in the Cantonment area. The latter was built in honour to those who lost their lives in the Mutiny of 1857.

Since India’s independence, Agra has been a part of the state of Uttar Pradesh in Northern India and gradually developed as an Industrial Town. However, the city of Agra today has transformed into a popular Tourist Destination for Travelers around the world for its famous monuments, some of which are popular under the UNESCO’s world heritage site and with the Taj Mahal as one of the seven wonders of the world, Tourists, Travelers, Photographers, Historians, and Archaeologists continue to visit the Taj all round the year.

But the history of the city still echoes, not just inside the Taj, but in the narrowest of lanes and the most shabby food joints where some of the most amazing Mughlai cuisines are served in the form of finely prepared Kebabs. The Mughals may have far gone but the culture is very much present in this Historical City even till date. One has to be there to absorb the atmosphere.